The Noise Next Door: Remix 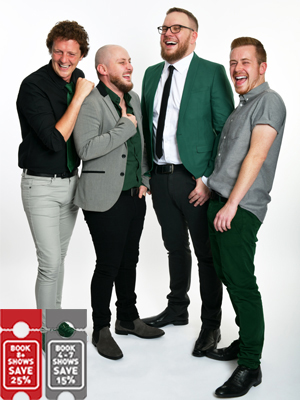 The boys are back and mixing things up with a brand spanking new show that will split sides, blow minds, and drop jaws.

The undisputed masters of off-the-cuff comedy will transform audience suggestions into ferociously funny scenes and songs in the blink of an eye with a perfect blend of ludicrous characters, witty one-liners, and explosive physicality. ‘Remix’ will see the chaotic quartet change the game with their most creative, cutting edge and hilarious show yet. Eleven time sell-out veterans of the Edinburgh Fringe Festival and one of the country’s most sought after comedy club headliners, The Noise Next Door leave audiences everywhere in awe of their lightning-quick wit and totally original comedic talents. They have appeared on BBC One, BBC Three, ITV1, BBC Radio 1 and BBC Radio 4, and have performed alongside the likes of Michael McIntyre, Al Murray, and Harry Hill.

Unstoppably funny and uniquely talented, The Noise Next Door are the next big thing in British comedy.