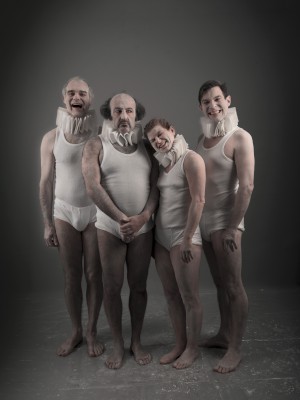 All 74 of Shakespeare’s deaths performed in one show!

There are 74 onstage deaths in the works of William Shakespeare - 75 if you count the black ill-favoured fly killed in Titus Andronicus. From the Roman suicides in Julius Caesar to the death fall of Prince Arthur in King John; from the carnage at the end of Hamlet to snakes in a basket in Antony & Cleopatra. And then there’s the pie that Titus serves his guests.

Spymonkey will perform them all - sometimes lingeringly, sometimes messily, sometimes movingly, sometimes musically, always hysterically. The four ‘seriously, outrageously, cleverly funny clowns' (Time Magazine) will scale the peaks of sublime poetry, and plumb the depths of darkest depravity. It may even be the death of them.

Adapted and directed by Tim Crouch (I, Malvolio, An Oak Tree, Adler & Gibb), The Complete Deaths will be a solemn, sombre and sublimely funny tribute to the 400th anniversary of Shakespeare’s death.

A Spymonkey co-production with Brighton Festival and Royal & Derngate Northampton

Developed at The Other Place at the RSC, and supported by the MA Dramatic Writing Lab at Drama Centre London at Central Saint Martins.

Reviews of #PULSE16 – The Complete Deaths

★★★★ "Poignant and hilarious – a fabulous bloodbath”

“As the deaths come quick, fast, and funny, Shakespeare’s most haunting words retain their power.”