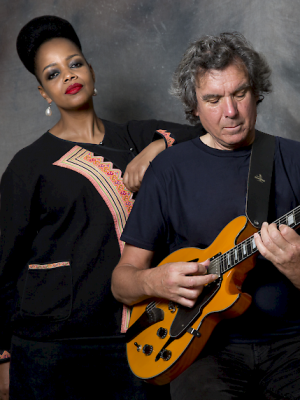 The night features guitarist John Etheridge, singer Vimala Rowe (whose recent CD with John “Out of the Sky” was rated as one of the top ten jazz CDs of 2016), Art Themen saxophonist along with local stalwarts The Chris Ingham Trio featuring Chris Ingham (piano), Arnie Somogyi (bass) and George Double (drums). Your ears will be treated to some of the best of new and standard jazz, each artiste playing a mix of solo and ensemble. The evening builds to a grand finale.

John Etheridge rightly enjoys a glowing reputation throughout the jazz world and beyond and has been described by Pat Metheny as, "One of the best guitarists in the world". He is a prodigiously gifted and creative player whose approach to music refuses to accommodate or even acknowledge artificial musical boundaries. John’s willingness to engage with so many styles is matched by his ability to excel in any of them.

In her early teens Vimala Rowe left England for the Far East where she quickly established herself as vocalist and recording a hit album. She then spent a year studying Hindustani classical vocals in India, which profoundly influenced her future style. Since then she has established herself on the London jazz scene as a remarkable live performer. Her performances have captivated audiences. Her mix of jazz sophistication and swing, soulful passion and a hint of Indian exoticism is enthralling.

Art Themen, a previous winner in the tenor sax category of the British jazz awards, toured the world fronting Stan Tracey's quartet for 20 years and has been featured with virtually everyone on the UK jazz scene. Outside the jazz scene he has accompanied such diverse artists as Mick Jagger, George Harrison, Rod Stewart, Jack Bruce, Joe Cocker, Chuck Berry, Alexis Korner and, even Bing Crosby!

Chris Ingham. Piano, his CD Hoagy was a Sunday Times top 10 jazz album of 2014. The musical director of popular film song quintet Jazz At The Movies, Chris was jazz piano and voice tutor at Anglia Ruskin University, Cambridge for 20 years. He leads the house trio at Jazz the Hunter Club and the Sunday Songbook sessions at the Apex, Bury St Edmunds.

George Double. George is a busy freelancer and respected published drum educator, notably for Trinity College, London. He tours regularly with vocal legend Jack Jones and has played with Marc Almond, Ruthie Henshall and Kym Mazelle as well as on West End shows. He drums with Jazz At The Movies, the Georgina Jackson Quartet and curates Hadleigh and Southwold Jazz Clubs in Suffolk where he has accompanied many top jazz musicians.

Arnie Somogyi. One of the UK's outstanding bass talents - musician, bandleader, composer, presenter, and music lecturer - Arnie Somogyi is much in demand among leading US and European musicians. Featured on over 30 top albums and film tracks.