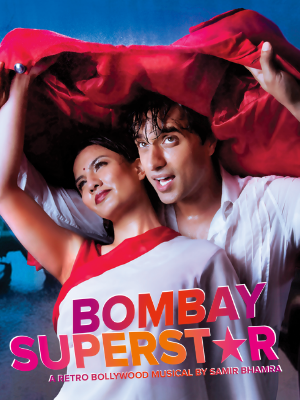 'Bombay Superstar' is a brand-new musical about love and betrayal in the golden age of Bollywood cinema.

Set to a soundtrack of iconic Bollywood songs from the 70s and 80s, with a cast of 11, live music and vibrant costumes, 'Bombay Superstar' brings the riot of colour, music, romance, and drama from the Bollywood big screen vividly to life on stage.

Laila, a blooming starlet is romanced by the dashing hero Sikandar. They star in blockbuster musicals where heroes wear their hearts on their sleeves and rescue beautiful damsels from the clutches of villains on the mean streets of Bombay.

As their passion secretly grows, the intensity of their emotions threatens to burn everything in the city of hope and dreams - will there be a happily ever after for the star-crossed lovers?

'Bombay Superstar' is the 50th show from Phizzical, who create bold, adventurous work which brings new perspectives to South Asian stories, challenges the status quo, and empowers the next generation of artists and theatre makers.