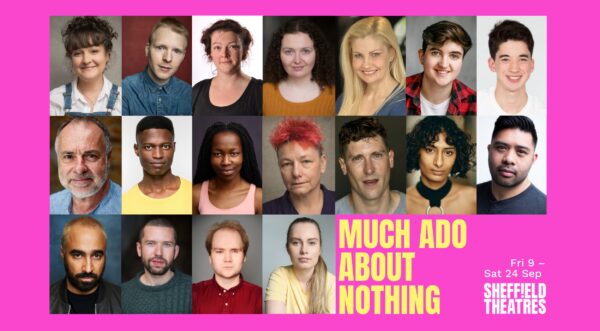 Sheffield Theatres today announces the full cast for their production of William Shakespeare’s well-loved comedy Much Ado about Nothing, co-produced with Ramps on the Moon. This will open at the Crucible Theatre, Sheffield this September before embarking on a UK Tour.

A pioneering initiative, Ramps on the Moon is a consortium of theatres which aim to enrich stories and the ways in which they are told by putting deaf and disabled artists and audiences at the centre of their work.

‘I do love nothing in the world so well as you. Is not that strange?’

Besotted young couple Claudio and Hero have fallen fast and are quickly engaged. Not everyone finds romance so straightforward – Benedick balks at the very thought of it and Beatrice agrees with him, on that if nothing else. But somewhere in this world, there’s someone for everyone, even if they’re right under your nose.

‘It is with much excitement that we take the lead for this year’s Ramps on the Moon production, which opens in Sheffield before touring to stages across the UK. Ramps on the Moon is a collaborative partnership which we are so proud to be a part of, and it is a thrill to produce such a well-loved Shakespeare play in our birthday year. Witty and uplifting, Much Ado about Nothing is a joyous show with a big inclusive heart and we have an incredibly talented cast to bring it to life.’

Michèle Taylor, Director for Change at Ramps on the Moon, added:

‘In a year of Much Ados, Sheffield Theatres’ production is sure to stand out and I can’t wait to see what the company does with the play once they get into the rehearsal room. Ramps on the Moon with Shakespeare is such an exciting prospect and represents yet one more milestone in our journey towards real equity for disabled and deaf people in mainstream theatre.’

Tickets for Much Ado about Nothing are on sale now with every performance, featuring the use of integrated creative sign language, audio description and captioning. Tickets can be booked through each venue’s Box Office in person, over the phone or on their website (links above).