What a Carve Up! 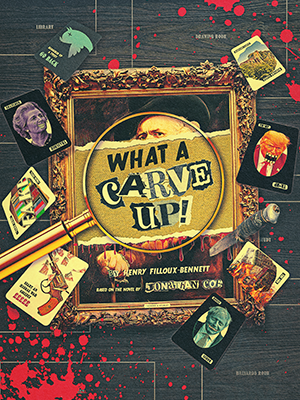 One thing in common – they are members of one of the most corrupt, powerful and toxic families in the country.

One prime suspect – the celebrated writer in the middle of compiling a history of the family.

A simple open and shut case?

What a Carve Up! chronicles the events leading up to the ‘Winshaw Murders’, examining evidence that was never considered at the time and asking the unanswered questions surrounding one of the most shocking crimes you’ve probably never heard of.

This thrilling murder mystery is written by Henry Filloux-Bennett, based on the award-winning novel by Jonathan Coe, and directed by Tamara Harvey. Produced by The Barn Theatre, Lawrence Batley Theatre and New Wolsey Theatre.

The show has an age guidance of 16+ and features strong language and graphic descriptions of murder.

To book your ticket for What a Carve Up! click HERE