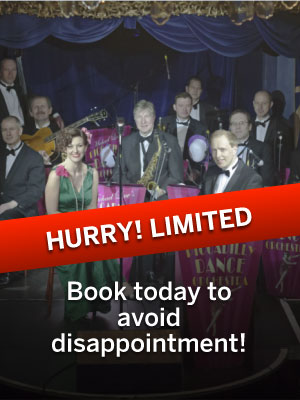 Michael and his world-famous orchestra proudly present their all-new programme for 2015: ‘V’ for Victory - a musical tribute to the 70th Anniversary of the end of World War Two.

Join Michael Law and his world-famous Piccadilly Dance Orchestra for an unashamed wallow in the great songs and swing numbers which cheered the troops on their Sentimental Journey home - and lifted the spirits of the world during the turbulent war years, including songs made famous by Glenn Miller, The Andrews Sisters, Anne Shelton, Joe Loss, Vera Lynn, Geraldo and Noël Coward.

A splendid evening for fans of the swing era, lovers of vintage popular music and plain nostalgia enthusiasts alike.

Reviews of V for Victory

The show at Bury St Edmunds, in September 2015, with Anita Harris was top rate!