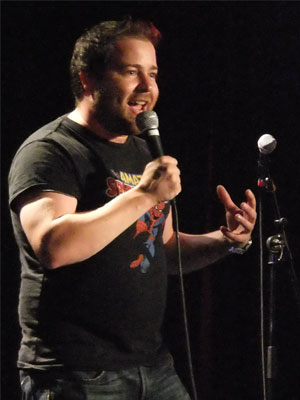 The best comedians from the UK and world circuit doing what they do best… but without the rude bits… ON APRILS FOOLS DAY!

Andrew O’Neill (MC)
Andrew is a stand-up comedian, a metalhead, an amateur occultist and a musician - pretty much a show off since birth. His TV appearances include Never Mind The Buzzcocks, and Saxondale with Steve Coogan, and he is a regular on the comedy stages at Download, Sonisphere, Bloodstock, and Leeds and Reading festivals. He has also opened for Amanda Palmer off of the Dresden Dolls, done audience warm-up for Never Mind the Buzzcocks, hosted the Metal Hammer Golden Gods, played at Torture Garden and the Bizarre Magazine Ball and load of other events where people mainly wear shiny things.

Ginger & Black
Ginger & Black are a double act, featuring the talents of Eri Jackson and Daniel Lawrence Taylor. They have been performing together since 2006, when they were runners up in So You Think You`re Funny and The Amused Moose Laugh Off at the Edinburgh Festival. They perform on the London circuit and all over the UK in clubs and at festivals. In 2013 Ginger and Black performed on Russell Howard's Good News and Stewart Lee's Alternative Comedy Experience.