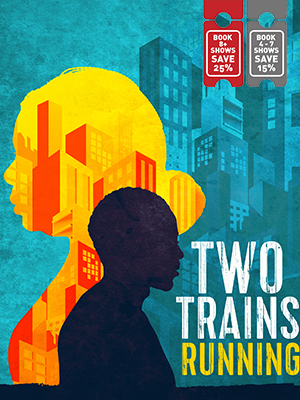 There’s a controversial new president in the White House, and racial tensions are on the rise.
It is Pittsburgh, 1969, and the regulars of Memphis Lee’s restaurant are struggling to cope with the turbulence of a rapidly changing world. The diner is in threat of being torn down, a casualty of the city’s renovation project that is sweeping away the buildings of a community, but not its spirit.
The iconic American playwright August Wilson paints a vivid portrait of everyday lives in this defining moment of American history. When Two Trains Running opened on Broadway in 1992, its legendary premiere won TONY and Drama Desk Awards. Directed by the 2018 winner of the RTST Sir Peter Hall Director Award, Nancy Medina, this major revival will introduce this Pulitzer Prize shortlisted modern classic to UK-wide audiences for the first time.
Supported by the Royal Theatrical Support Trust.

Recommended for ages 11+, at parents' discretion.
Contains some strong language and some sexual content.

An absorbing, powerful drama, brilliantly performed by a tremendous company. Absolutely eye opening on so many fronts. A must see.