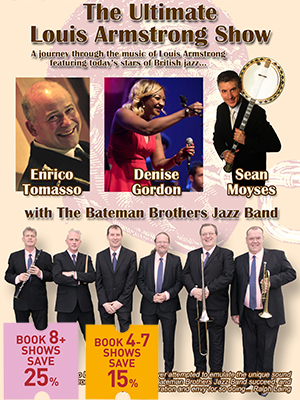 The Bateman Brothers Jazz Band has become one of Britain’s most established professional jazz bands hitting the jazz scene with a bang very quickly after they were formed! They model themselves on the Louis Armstrong All-Stars, probably the greatest jazz band that there ever was. Alan Bateman’s stunning trumpet playing has the critics struggling to tell the difference between him and Louis and the rest of the band follow suit in their respective roles.

Building on this success the band has put together an even bigger show. Encompassing the entire career of Louis ‘Satchmo’ Armstrong, they are presenting ‘The Ultimate Louis Armstrong Show’. In order to do this, they feature three very special guest stars:
- Enrico Tomasso (trumpet)
- Sean Moyses (banjo)
- Denise Gordon (vocals)

You'll get a non-stop show that will have you on the edge of your seats right from the start and a finale that will leave you craving for more. That's how it was with Louis and that is how it is with The Bateman Brothers Jazz Band.