The Noise Next Door: At Sea 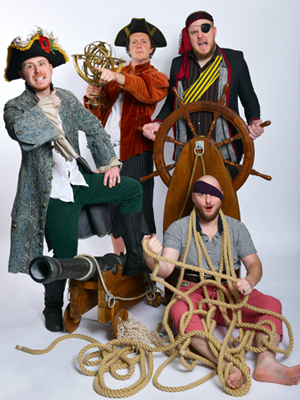 The Noise Next Door are the U.K’s premier improv comedy troupe who have taken the comedy world by storm.

The boys are back and will once again be delighting family audiences with a shiny new family show THE NOISE NEXT DOOR AT SEA!

The Noise Next Door are swinging back into action with an epic new show that’s fun for the whole family! Join our crazy crew for an adventure on the high seas as we need your help to chase down the fearsome Captain Bloodbeard. The Noise Next Door will take your suggestions and transform them into jaw-dropping scenes and mind-blowing songs in the blink of an eye that are equal parts swash-buckling and side-splitting.

With mermaids, magic, sea-shanties and swords, this anarchic afternoon with the quickest wits in comedy is one you'll treasure forever.

As seen on BBC1's 'The One Show’ and ITV1’s ‘Tonight at the Palladium’.

The Noise Next Door have appeared on BBC One, BBC Three, ITV1, BBC Radio 1 and BBC Radio 4, they were nominated for a Chortle Award in 2014, and have performed alongside the likes of Michael McIntyre, Al Murray, and Harry Hill. Having received standing ovations in front of corporate dinners, the British forces, secondary school students and even fans at ‘Download’ Heavy Metal music festival, they are also one of the most versatile acts in the business. Unstoppably funny and uniquely talented, The Noise Next Door are the next big thing in British comedy.