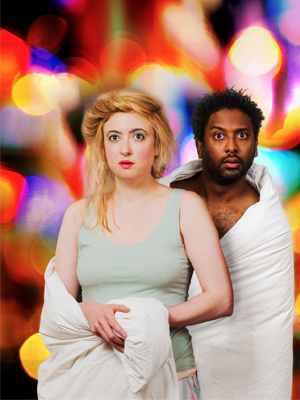 Invited behind the velvet rope at London’s most exclusive club, Tamino doesn’t have time to stop for beggars, paparazzi, or even his girlfriend Pamina.

Going to bed after a blazing row later that night, this ordinary couple relive the events and encounters of the evening in dreams made extraordinary by the lateness of the hour, their befuddled senses, and yes, a touch of magic.

Following their hugely popular and critically acclaimed re-imaginings of operas including Tosca and Don Giovanni, OperaUpClose come to the New Wolsey Theatre with this bold new take on a classic. With magic supplied by Glyn Maxwell’s mischievous poetry, Alex Beetschen’s witty orchestration and Valentina Ceschi’s theatrical creativity, this production will re-invent The Magic Flute in fabulous new robes for the era of Trump and recessions, casting rays of light and love into the darkness.