The Best Little Whorehouse In Texas 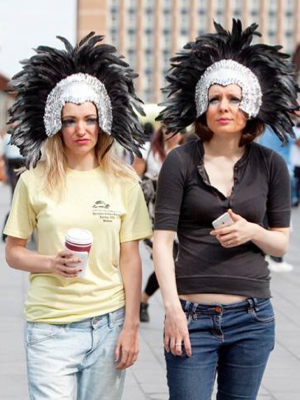 The Best Little Whorehouse in Texas

GETINTHEBACKOFTHEVAN take a smash-hit musical and smash it!

This Live Art Community Musical charges headlong into a bare-knuckle fight with virtuosity, legitimacy and taboo. A ‘misfit’ cast skips its way through a toe-tappingly problematic landscape of stereotype - the kind we convince ourselves has been wiped clean off the map by now.

Stuffed with cameos and interventions, GETINTHEBACKOFTHEVAN's version of The Best Little Whorehouse in Texas explores exertion, desire, cliché, the epic and will be unlike any musical you have ever seen.

Look out for the open call for your chance to be involved! No experience necessary. Information will be announced on getinthebackofthevan.com.

GETINTHEBACKOFTHEVAN is a performance company based in Essex and London making work at the crossroads between theatre, live art, cabaret and stand-up. They are particularly interested in humour, endurance, glory and the banal. The company is an Artsadmin Associate Artist and an associate company at both Colchester Arts Centre and Roehampton University.

A SPILL Commission, presented in partnership with the New Wolsey Theatre.

Reviews of The Best Little Whorehouse In Texas

Riotously entertaining… A gender-bending Best Little Whorehouse in Texas and destruction of Holyroodhouse contributed to a challenging, questioning, pleasurable festival.

Took family to see this show last night (aged 14- 77) and we all loved it. Real feel good production with fantastic energy and lots of surprises. We all laughed a lot and enjoyed some extremely good performances from the talented amateur cast. More community musicals please if they can all be like this one!

It was only two and a quater hours. The previous reviewer clearly has no perception of time, and therefore should not be trusted.

GETINTHEBACKOF THE VAN’s unique production of The Best Little Whorehouse in Texas can be summed up in two words – Musical Mayhem. It was little wonder that several people left the auditorium during the show. They had come expecting to see a musical that conformed to all the usual conventions. It was a shame that they did not appreciate this was an outrageous parody of all that musical theatre has to offer. From the outset, that is to say before the show started, the principal actors were stomping around the stage displaying an enthusiasm and energy that never stopped for a moment during the course of the evening’s two-plus hours of dance, song and action. Taking a well known plot as their vehicle, the company invoked the concept on which the musical theatre is based i.e. a sudden burst into song and spontaneous dance and its break with reality. However, they did not stop there, by introducing ‘amateurs’ as extras, miscasting and cross dressing this parody gave us all that pantomime and am-dram has to offer by way of entertainment. Vibrant, noisy and shocking when the cast mimicked the finale of Hair we were left stunned but more than happy to clap along with the final rousing number. ‘What was that all about?’ was the question on many lips as the audience stepped out into the night but it was a clever poke of fun at the musical as an art form albeit more akin to the genres of the Theatre of the Absurd and Theatre of the Ridiculous. I enjoyed it but mainly because I left my deaf-aids at home! Notwithstanding that, I envy the cast their energy and fortitude.

I have just come back from this. I have never been so traumatised by a 'musical'. None of the cast could sing and were out of tune throughout. There was no storyline. The entire cast got naked for absolutely no reason half way through, and proceeded to dance naked and slap themselves. There was no organisation, no characters, and no one knew their lines. I am absolutely appalled that the New Wolsey would put this on their stage, and not warn the audience there would be full frontal nudity. I can only imagine the reason there was no interval in this three hour monstrosity is because they thought the audience would not return. The character in the cowboy boots was so manic, I firmly believe she was drunk, and seemed to want to sabotage anyone in the production with any talent. I will be calling the New Wolsey in the morning to insist on my money back.