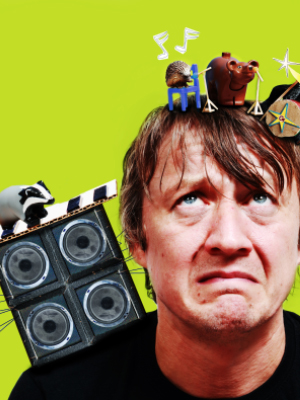 Kid Carpet invites you to rock out!

Kid Carpet will guide you through everything you need to know to be able to rock out big time. Even if it’s your first gig! Kid Carpet welcomes you to join in with stories, games and songs whilst simultaneously inviting you to play ping pong, help catch a lost sandwich in space and take part in a grand dance contest.

All the best bits from Kid Carpet’s anarchic family shows have been mashed up and remixed to create the gig of the century. This lively, interactive and entertaining show contains a unique mix of live music, performance, comedy, animation and ping pong balls. Classic tracks from Kid Carpet include: Gorilla, Poo in the Forest and Golden Eagle.

Kid Carpet began making music with old toys and a punk rock DIY attitude and has earned himself an international reputation as a pioneer of catchy, lo-fi electro-pop music for over 10 years. He has played hundreds of gigs nationally and internationally as headline and support to acts like Arcade Fire, Fat Boy Slim, Electric 6 and Willy Mason. With 5 albums under his belt he has more recently turned his hand to live theatre.

"Anarchy, irreverence and belly laughs for adults and children alike"

"Kid Carpet has created a fresh, funny and engaging show that is quite unlike anything I have seen before"