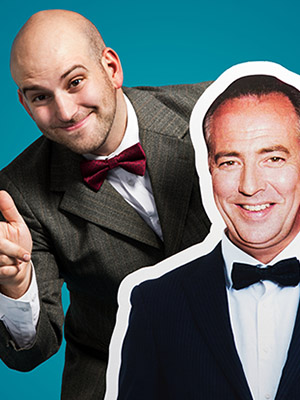 A very funny exploration of the rise and fall of Nick Cassenbaum’s hero, Michael Barrymore

Nick Cassenbaum returns to PULSE Festival following his international hit show Bubble Schmeisis (“generous and poignant” ★★★★ The Stage). This time he has created a passionate and playful tribute to his childhood hero, Michael Barrymore.

Ever since he was a kid, Nick has loved Michael Barrymore. In this heartfelt tribute, Nick invites you to experience the turbulent love affair between entertainer and audience. Nick uses his critically-acclaimed storytelling style and Barrymore’s iconic shticks, to weave his own story alongside Barrymore’s dramatic rise and fall. With live music and gags aplenty, it promises to be ‘Alwight!’
Created with Danny Braverman (Wot? No Fish!!!), supported by Bread & Circuses Arts and developed at and supported by The Yard Theatre.

Reviews of #PULSE19 – My Kind Of Michael