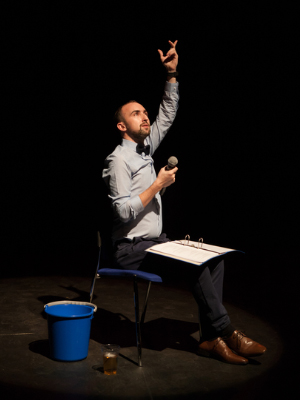 With the modern jukebox musical traditionally comes a multitalented cast, a live band (or orchestra if you are lucky), opulent sets and decadent costumes, extravagant dance routines, dramatic key changes and the odd hydraulic lift or two. We’ve Got Each Other has none of these things (they cost a lot of money), but Paul still tries to create this all singing, all dancing spectacle using the powers of your imaginations.

Through entertaining descriptions of the show as it unfolds, and a hundred plus lighting cues, Paul invites the audience to ‘fill in the gaps’ and imagine the breath-taking tragic love story of Tommy and Gina.