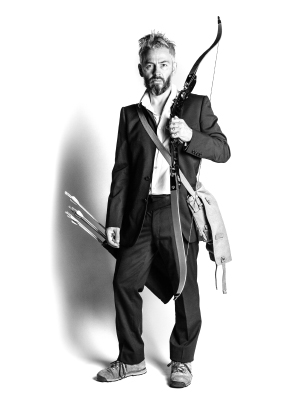 Make the world a better place by changing the story of money.

“I love Robin Hood. We’ve been best mates for over forty years - ever since I met him as a seven-year old boy in autumn 1975. Recently, we’ve spent a lot more time discussing the state of the world. He is 100% convinced that the main reason for the recent turmoil is down to the growing gap between the rich and poor. Robin says that money is a fiction that relies on mutual trust and that we can change the story of money. This show is his idea. He says it’s the only thing I can do if I want to make the world a better place. And, like Robin says, we can definitely do better than we’re doing at the moment.”

Me & Robin Hood is Hoipolloi’s latest show questioning the value of art and the power of story. Following on from The Duke, which captured the public’s imagination with its combination of theatre and fundraising and has raised over £46,500 to date, Me & Robin Hood seeks to raise money for Street Child United World Cup 2018. Audiences in 2017 raised over £20,000 for the worthwhile charity who use the power of sport to change the way the world negatively sees and treats street-connected children, so they can be protected, respected and supported to build a life away from the streets. Please bring cash to the show, we have more work to do to change this story…