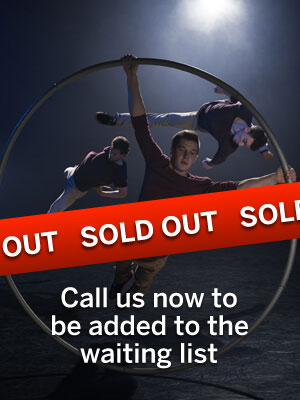 Wittily celebrates all things blokey through a series of heroic, risk-taking physical feats.

BARELY METHODICAL TROUPE presented by CRYING OUT LOUD on behalf of Circus Evolution.

A thrilling show, it wittily celebrates all things blokey through a series of heroic, risk-taking physical feats. With an inventive mix of flawlessly-timed acrobatics, shoulder-high balances and a stunning routine inside a spinning metal wheel the lads explore male companionship and its limits.

‘A jaw-dropping magnificent show.’ The Stage ★★★★

‘Frisky and risky, pointed yet playful, Bromance is well worth seeking out during it UK tour in May.’ The Times ★★★★

‘Barely Methodical Troupe could teach Isaac Newton a thing or two about gravity.’
The Stage ★★★★

‘Bromance has a freshness and appeal that bodes well for their (Barely Methodical Troupe) collective futures.’ The List ★★★

‘Bromance is a real coup for British circus – watchable, wry and utterly winning.’ What’s On Stage
★★★★

‘A touching, thoughtful show about being male.’ Financial Times ★★★★

Bromance produced by DREAM with support from Underbelly Productions and the National Centre for Circus Arts as part of Circus Maximus.