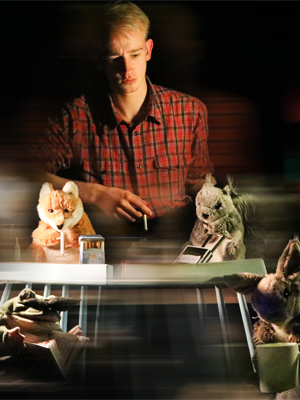 Presented by Nod At The Fox.
Created and performed by Eden Harbud.

"If it’s likely something you want to do is going to go very VERY badly... then it’s probably not worth doing, right?”

Don’t be fooled by the cuddly toys. If you thought this was going to be a children’s show… You thought wrong.

After his resounding success at the latest Pulse Festival Ipswich, Eden Harbud returns under the name of his new company: Nod At The Fox. Burning Tails has so far been seen by audiences in London, Brighton, Ipswich, Hertfordshire & Cambridge.