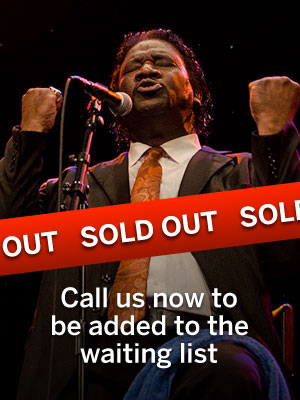 The eldest son of blues legend Muddy Waters comes to Ipswich for the biggest blues night the town has seen for many a year. Larry Mud Morganfield is the proud heir of the King of Chicago Blues with a big and powerful voice and the showmanship to go with it. He has shared stages throughout the world with many of his father’s fellow superstars like Buddy Guy and Pinetop Perkins. Mud has also appeared on Jools Holland’s Later TV show.

For his eagerly awaited Suffolk debut he will be joined by an all-star group which includes Big Town Playboy Ian Jennings and harmonica player Steve Weston who appears on the best-selling album Going Back Home by Wilko Johnson and Roger Daltrey. Mud Morganfield’s show is the ultimate blues experience.

BONFIRE NIGHT
BBQ on the terrace for £2.50 per person. Must be booked with your tickets. You'll be given the option during the booking process. Limited availability