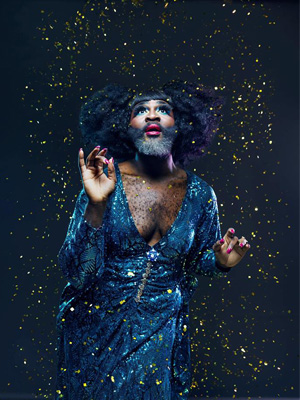 Walking the tightrope between his public and private personas, Le Gateau Chocolat explores the people, the moments, the relationships, the art that have come to
shape us and the ideals we aspire to. Re‑imagined especially for SPILL Festival, and accompanied by a seven‑piece band for the first time, Gateau unashamedly weaves through an eclectic mix of music; pop, opera, rock; Kate Bush, Whitney, Meatloaf, Pavarotti … investigating his own objects of worship through the songs and music of his personal icons.

Le Gateau Chocolat is an Opera singing British boy with a law degree and a big heart who also likes to dabble in the dark arts of pop, jazz and musical theatre. This internationally renowned cabaret star has performed in Olivier‑nominated and award‑winning shows such as Porgy and Bess and La Soiree, delighted the Queen as part of her Jubilee Flotilla and travelled the globe with his own acclaimed solo productions including Le Gateau Chocolat, I Heart Chocolat, In Drag, Black, and Duckie.

Most recently, he has appeared in Rufus Norris + Simon Stephen’s reimagining of Threepenny Opera at the National Theatre, and Twelfth Night at Shakespeare’s Globe Theatre.