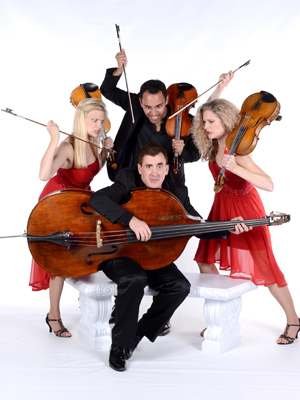 It’s a classical concert, a gypsy-folk romp, an opera, a stand-up comedy set and a brilliant dance show all rolled into one! From Beethoven to bluegrass, Baroque to pop, Mozart or Offenbach to Elvis, Strauss to Saturday Night Fever, there really is something for everyone and Graffiti Classics never fail to get audiences laughing, clapping and singing along. Kids and adults alike love the uplifting and virtuosic variety of musical styles, all tied together with cheeky audience interaction.

Graffiti Classics were founded by Irishman Cathal Ó Dúill whilst street-performing in Covent Garden. He realised that classical music could be made fun for everyone through interaction and comedy. Having honed their craft on London's streets, Graffiti Classics have developed a world-class virtuosic show that offers a wickedly refreshing alternative to the stuffy elitist perception of classical concerts. The band are now in hot demand all over the world and the show is loved by everyone, whatever their age and musical inclination.

I have just left the theatre having watched this show. What a fantastic performance. I have clapped so hard my hands are now bleeding, Never sat still for a moment, cheering and bobbing up and down in my seat. The comedy was brilliant i laughed until the tears were rolling down my face. These musicians are fantastic all rounders. A show not to miss if it comes your way. Thank you so much you are all stars.