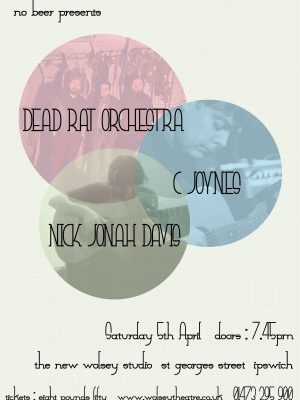 "DEAD RAT ORCHESTRA see themselves as adventurers; adrift in a sea of sound and possibility, plucking textures and melodies to craft their idiosyncratic vision of what music and performance can be. Most often they have steered their ship through the idioms of Folk and Improv, to shout, sing and glisten at audiences from the UK to Mainland Europe, Scandinavia to Canada. 'Acutely haunting and occasionally brutal' their music always attempts to enchant and entrance, be it emotionally or physically."

"English acoustic guitarist C JOYNES, a resident of Cambridge, heavy thumb-led finger-picking technique that harks back to traditional country-blues and early ragtime, however, he uses this technique to explore alternative melodic traditions: the English folk-tune; North and West African music; elements of classical Indian music; proto-minimalist and impressionist musics from the European classical tradition. His approach to the recording and compositional process contains a subtle and unassuming experimentation, at times including collaged fragments, field recordings, processing, en-plein-air recordings, and cut-and-paste." (Rhodri Davies)


"NICK JONAH DAVIS is a solo guitarist from Nottingham, England. Nick’s music, which has been described as ‘a highly spirited series of wordless tales‘, draws on the modal tunings and freewheeling spirit of British trailblazers such as Bert Jansch and Nick Drake, as well as pre-war blues and the ever deepening post-Takoma tradition. Critically acclaimed as ‘a formidable guitarist‘, delivering ‘a high-wire act that very few guitarists could pull off’, Nick has released two albums with the seminal American label Tompkins Square Records."