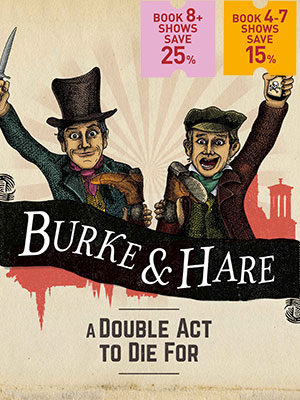 In the backstreets of Edinburgh in 1828 there’s a killing to be made. Scientific research Hares on apace, the surgeons are crying out for fresh bodies to dissect, and you’d need to be a right Burke not to spot a gap in the market. And it’s only a small step from robbing graves, to helping people into them…

Three versatile actors, supplied with an array of hats, a variety of disguises and an extraordinary collection of accents play the entire cast of this notorious story – living and (soon to be) dead. Music, murder and mayhem combine in Tom Wentworth’s breathless take on this infamous double act, playing fast and loose with the facts to create a full blooded evening’s entertainment which is more hysterical than historical.

A gleeful mash up of history and penny dreadful scandal, fast funny and ever so slightly sick
The Times

Buy Tickets
Ridiculously limited availability!
There is only one ticket left for this performance!