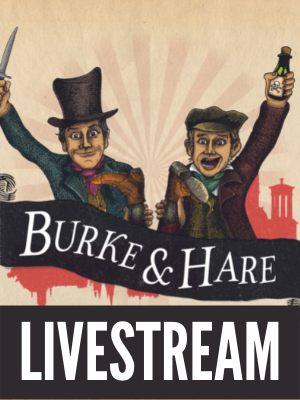 PLEASE NOTE: The tickets bookable on this page are for the livestream so you can watch from home.

A new version by Tom Wentworth.
Originally created by Jenny Wren Productions.
This production of 'Burke & Hare' was premiered at the Watermill Theatre, Newbury.

The 1830s - and in Edinburgh’s back streets and alleys, there’s an absolute killing to be made. Scientific research Hares on at great speed; the surgeons are crying out for fresh bodies to dissect and you’d need to be a right Burke not to spot a gap in the market!

Three versatile actors, supplied with an array of hats, a variety of disguises and an extraordinary collection of accents play the entire cast of this notorious story – living and (soon to be) dead. Music, murder and mayhem combine in Tom Wentworth’s fast-paced take on the notorious grave-robbing duo. Playing fast and loose with the facts, he creates an evening’s entertainment that’s more hysterical than historical.

‘A gleeful mash up of history and penny dreadful scandal, fast funny and ever so slightly sick’
The Times