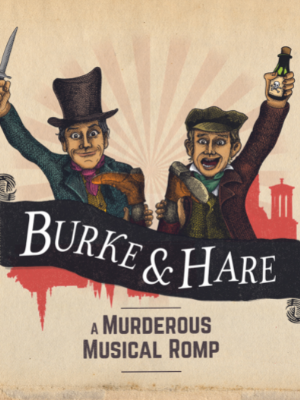 A new version by Tom Wentworth.
Directed by Abigail Pickard Price.
Originally created by Jenny Wren Productions.
This production of 'Burke & Hare' was premiered at the Watermill Theatre, Newbury.

The 1830s - and in Edinburgh’s back streets and alleys, there’s an absolute killing to be made. Scientific research Hares on at great speed; the surgeons are crying out for fresh bodies to dissect and you’d need to be a right Burke not to spot a gap in the market!

Three versatile actors, supplied with an array of hats, a variety of disguises and an extraordinary collection of accents play the entire cast of this notorious story – living and (soon to be) dead. Music, murder and mayhem combine in Tom Wentworth’s fast-paced take on the notorious grave-robbing duo. Playing fast and loose with the facts, he creates an evening’s entertainment that’s more hysterical than historical.

‘A gleeful mash up of history and penny dreadful scandal, fast funny and ever so slightly sick’
The Times 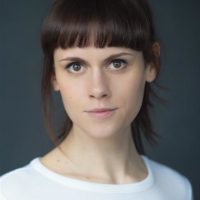 For the NWT: One Man, Two Guvnors; Our Blue Heaven & Never Lost at Home

Josie also voices audiobooks and is a Founding Director of Chaskis Theatre - an international actor training and performance company.

Hayden Wood — William Burke (and others) 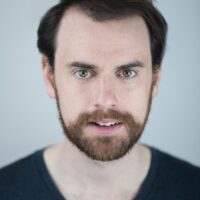 Hayden has recently finished a year in Immersive Everywhere's production of Doctor Who: Time Fracture. His theatre credits include Chris in The Play That Goes Wrong (West End), King/Father Canty in The Prince and the Pauper (Watermill), Bagot in Richard II (Arcola, Houses of Parliament), Mad Hatter/Knave of Hearts in the original cast of the Olivier-nominated Alice's Adventures Underground (The Vaults).

His credits as a composer include The Beggar's Opera, Lorca is Dead and Octavia (all with Belt Up Theatre.)

He has directed two acclaimed solo shows (Ladyface and Lois) both for the comedian Lucy Farrett.

Hayden is delighted to be returning to Burke and Hare, having originated the role of Burke at The Watermill in 2018, before playing him again for the show's transfer to Jermyn Street later that year. On this occasion, the show was nominated at the Offies for Best Director and Best Ensemble.

James Mack — William Hare (and others) 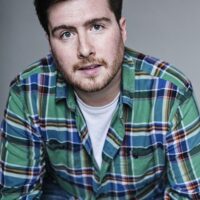 James trained at The Guildhall School of Music & Drama, graduating in 2013.

He has most recently appeared as Dennis Main-Wilson and Peter Eton in the premiere of Ian Hislop and Nick Newman’s comedy SPIKE at The Watermill Theatre.

Abigail is a freelance director and Associate Director of The Watermill Theatre. Her recent credits include:

Toots is a London based designer who trained at Bath Spa University. She works across the U.K
and internationally.

Matt is a critically acclaimed, multi award nominated, international lighting designer. Matt’s designs are influenced by his love and affinity with colour, form and music, delivering lighting which is intrinsic to the motion, atmosphere and rhythm of the performance, applying this quality and his passion to all the genres in which he works

Find out more at www.james-cook.me.

Beth graduated from the Royal Birmingham Conservatoire in 2019 and has previously worked as an ASM and CSM on regional shows in the midlands and on UK tours, as well working as a puppets and stage management dep across the West End. This is Beth's first time at the New Wolsey, and she's thrilled to be working on Burke and Hare.

Emily is a freelance Stage Manager based in the West Midlands. She graduated from the Royal Birmingham Conservatoire in 2019 and has since gone onto work on a wide variety of immersive, site specific and new theatre with companies such as Stan's Cafe, Changeling Theatre and DashArts. Emily is very excited to be back in Suffolk and at The New Wolsey.

Radio includes: The Chronicles of Burke Street, X Files: ColdCases; My Name is Why, The Testaments

Film includes: The Railway Children Return, Chuck Chuck Baby, Legend of Ochi, The Mad Axeman; Watcher in the Woods, The Professor and the Madman, The More you Ignore Me

Find out more about Pete’s video production work at www.warehousedigital.co.uk.

Kay has been working in theatre for the past 3 years. She has experience working in Wardrobe, dressing and is now going into stage management.

This is Kay’s first time working at the New Wolsey Theatre and is very excited to be ASM for Burke and Hare.

Absolutely fabulous - one of the best things we have seen for a long while. Brilliantly written and performed, and the 3 actors are exceptionally talented. Very funny, very fast and a great show

An outstanding cast take you through a fantastic madcap but true story. Their skills take your very breath away as they take on so many roles that really work, both clever and funny.