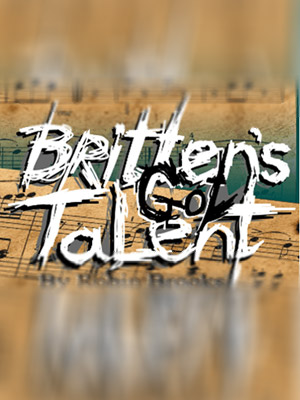 "He just used people, and he finished with them, and that was that".

At a time when Britten’s talent is being celebrated throughout Suffolk, Robin Brooks’ irreverent comedy reveals what it was like to be up close and personal with a 20th Century genius.

A chamber musical with cabaret songs. Written by Robin Brooks, Suffolk writer and one of Radio 4’s most commissioned dramatists

Reviews of Britten’s Got Talent

Britten's Got Talent was an excellent play, we really enjoyed it. Playful and serious, with some humorously sharp observations and irresistibly amusing lyrics in the musical items - "he's very good at tennis ... and writing Death in Venice" !!!!! The cast were so good that when we got home we 'googled' a few names - which soon revealed that, even though this was a small studio production, we had been treated first class actors. This was our first visit to the Studio and we were very impressed. Its small and intimate atmosphere are just what we like.