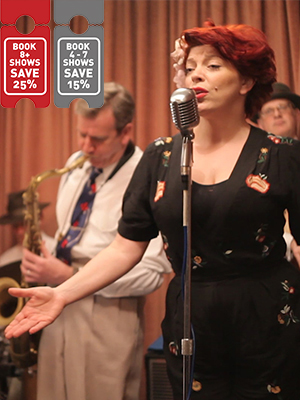 A welcome return to the Wolsey for one of the top Swing / Jump – blues bands around today.

Blue Harlem have become regular favourites at venues such as the world famous Ronnie Scott’s, The 100 Club, Soho’s Pizza Express and many more. The band also performs regularly abroad, having appeared at festivals from Norway to Dubai and many stops in between.

Blue Harlem launched the career of rising star Imelda May and are now proud to feature as their vocalists the sensational Sophie Shaw. The band are led by saxophonist and arranger Al Nicholls and feature Paul Eldridge on piano, Sandy Burnett on double bass, Paul Robinson on drums, Gethin Liddington on trumpet and Horace Cardew on saxophone.

Where the blues meets jazz, swing and boogie - woogie is an apt description of Blue Harlem