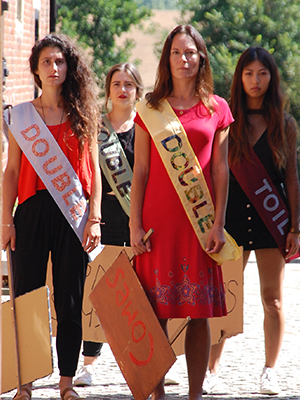 It's 2019, it's Time's Up Now! Yet for three young women in the city it still feels like the 1950s. But that's about to change when Cate walks into their lives and shows them what being a witch should be about.

All Hail Macbeth mixes comedy and high drama, with more than a little bit of magic, to tell the backstory of the Three Witches in Shakespeare's Macbeth.

A cross between Harry Potter, Macbeth and Top Girls, All Hail Macbeth has an all-female cast with a three-part harmony style group of singers, putting a retro twist on modern-day classics.
Packing Shed Theatre produces new writing by playwrights based in the Eastern Region performed by creatives also based in the East. All Hail Macbeth is their fourth show and follows a sell-out run in their hometown of Colchester last summer.