A Salute to Sinatra and the Swing Legends 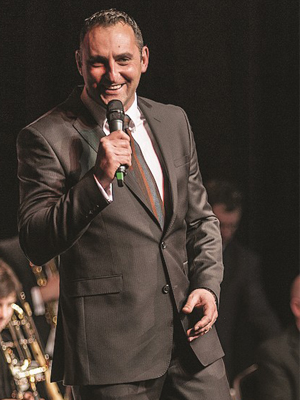 Award winning singer Matthew Ford is widely regarded as the finest big band singer in the UK, and he is delighted to present this show which celebrates Ol’ Blue Eyes and the Swing Legends.

The last two years have been an exciting time for Matt, with TV and Radio appearances on The One Show, Sky Arts, BBC Radio 2, Friday Night is Music Night and BBC Radio 3 In Tune programme. In addition to this Matt has toured the major UK concert Halls with the John Wilson Orchestra, culminating in a sold out show at the Royal Albert Hall. Matt made his third appearance on the BBC Proms in August 2016 with the John Wilson Orchestra, performing the music of George Gershwin. Matt has also performed at some of the UK’s most prestigious music festivals including Cheltenham, Aldeburgh, Hampton Court Palace and the Welsh Proms.

As always his nine piece band will feature the UK’s finest musicians, who with Matt, will perform a comprehensive celebration of the hits of Frank Sinatra. The show will also pay tribute to Tony Bennett, Matt Monro, Bobby Darin, Sammy Davis Jr, Andy Williams and many more.

If you like Sinatra, swing standards and The Rat Pack then this is the show for you.

“One of the finest voices this country has ever produced “
Clare Teal, BBC Radio 2

Reviews of A Salute to Sinatra and the Swing Legends

We saw the show at the Pizza Express Jazz Club last week and loved it. Matt is a great interpreter of those songs and the musicians in the band are excellent too. Hope all the people who come to see/hear the show at the weekend enjoy it as much as we did.