I’m a terrible dance critic. For starters, I don’t know what any of the proper moves are so haven’t the first clue if they’re being done right. I generally form, ahem, strong attachments to charismatic male performers, skewing my objectivity completely, and regardless of gender, I basically love everything as soon as they put a half-decent song on.

And there were loads of good tunes in May-We-Go-Round by the Hiccup Project, so I was fucking loving it. Craig David, Spice Girls, Cher, Hall and Oates… all the classics. But, before you all start with the critical distance shit, I swear there was more to it than that. 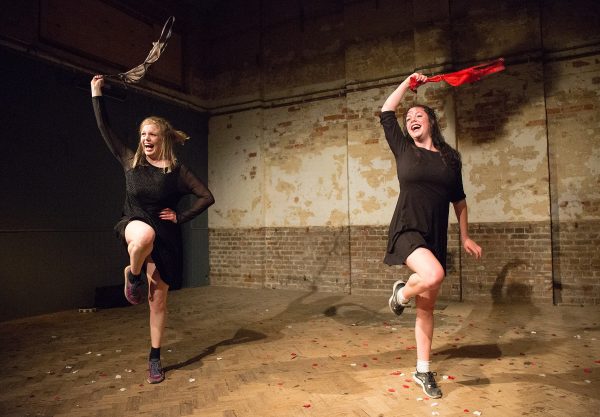 Teenage girls are difficult to represent accurately in art. Actually, no, that’s not true. That should read: Artists often find it difficult to accurately represent teenage girls in their art. A lot of the time that’s because artists – or should I say, artists whose work is given prominence – are men, and have never observed a teenage girl from anything other than the male perspective. With that framing, teenage girls become these magical, unknowable, muse figures, until their unknowableness turns to frustration and they are instead presented as surly, unthinking bitches, powered by hormones and hate.

When women make art about teenage girls, it’s often shot through with this kind of warm regret. Not motherly exactly, but with a sense of ‘oh, wasn’t I silly back then’, or ‘here’s what I’d do differently now’. I can’t think of many works that recall the heteronormative teenage girl experience as the mixture of joy and excitement and insecurity and heartbreak that it is. At that age, everything is simultaneously a rehearsal for reality and THE MOST IMPORTANT THING THAT HAS EVER HAPPENED AND WILL EVER HAPPEN. Friendships are total, and fallings-out are totaller. And sex is like this magnetic cloud that wafts around your body, twenty four hours a day.

The sex thing is possibly why it’s so difficult – slash problematic – to talk about teenage girls onstage. That Lolita image has permeated too much in the past. A ‘blossoming’ pubescent body, and the feelings within in, are dangerous territory when young women are still regularly objectified and abused. It’s almost impossible to do sensitively when you’re not an actual teenage girl, and if you are, it’s far too fraught – bursting with potential disaster.

May-We-Go-Round is refreshing in that it’s two adult women revisiting their teenage friendship and schooldays boyfriends, but without (apparently) rewriting history. If there is residual break-up awkwardness, they say so and move on, and if there are regrets, they’re presented from both angles – the justification at the time, and the realisation now. Dance is a perfect artwork for depicting youthful exuberance, but it’s also the perfect artform for depicting that constant magnetic cloud of sex that hangs around a teenager’s body, and the way that the version in the imagination is almost always better than the real thing.