We’re thrilled to announce that this year we will indeed have a panto – The Snow Queen!

What better way to lift all our spirits than the return, the redesign, the reimagining of the New Wolsey’s Rock ‘n’ Roll panto! It’ll be a little different to usual, mixing together live action, live music, pre-recorded film, animations and more, in a way that ensures that everyone’s safety is the top priority at all times. Each show will be streamed live for £25 a screen, so you can watch safely from your own sofa at home, in your pyjamas if you like!

Plus, if you fancy coming into the theatre itself, our new, socially distanced auditorium will seat approximately 130 people within their bubbles, with seats available in groups of two, three, four or six, at £50, £75, £100 and £150 respectively.

You may also spot the ‘Carers’ Big Night In’ on our schedule. Here at the New Wolsey, we want to say a BIG thank you to all the carers who have worked relentlessly throughout the pandemic. As a way of showing our gratitude, we’re putting on an exclusive performance of The Snow Queen, with our auditorium seats and 400 online tickets gifted specifically to the carers of Suffolk for that show. Online tickets for this performance will remain available for booking by the public.

All performances, both online and live, will be captioned and audio described (please note the only performance where captioning is not available is Wed 23rd Dec at 7:00pm).

The show on Weds 23rd Dec at 7:00pm will be interpreted in British Sign Language for audiences both in the theatre and at home.

Please note that the live element of the show and the offer to come into our auditorium is subject to change according to government guidance in response to COVID-19. If you have any questions about this, please email tickets@wolseytheatre.co.uk

The cast features all your familiar New Wolsey favourites, starring:

So what’s The Snow Queen about?

All’s well in the peaceful little town of Ballbroken; Gerda is about to be crowned the Queen of the May, the blacksmith’s apprentice Simon Specialwit hopes to graduate and get his very own hammer, and Dame Sigrid Smorgasbord has prepared a magnificent May Day feast. What’s more, it looks like something’s blossoming between Sigrid’s young son Kay, and Gerda, the blacksmith’s daughter. To top it all Primrose, Spirit of the Spring, smashes the Snow Queen’s cursed mirror, to destroy its dark powers and banish her forever. Little does she know this will only make matters worse!

Soon Kay is spirited away in the Snow Queen’s magic sleigh and held captive in her glittering Ice Palace. It’s up to brave young Gerda and poor Dame Sigrid to trek to the Frozen North to rescue him. Can they make it before Kay is turned to ice forever? Will love come out on top? And just how will Simon earn his very first hammer?

This year Peter Rowe’s Rock ‘n’ Roll panto is reimagined, bringing a brand-new adventure and all your favourite actor-musicians right into your living room! Featuring iconic songs like Let’s Get Loud, If I Had a Hammer, I’m Gonna Be (500 Miles), I Can See Clearly Now and Love on Top, The Snow Queen will be a sumptuous spread of music, mischief and mayhem for all the family.

If you’re planning on grabbing some auditorium seats, you can find out more here.

Information on livestreaming tickets can be found here.

The audio flyer for this show can be accessed here.

The British Sign Language interpreted flyer can be found here.

Enjoy the show and happy Christmas! 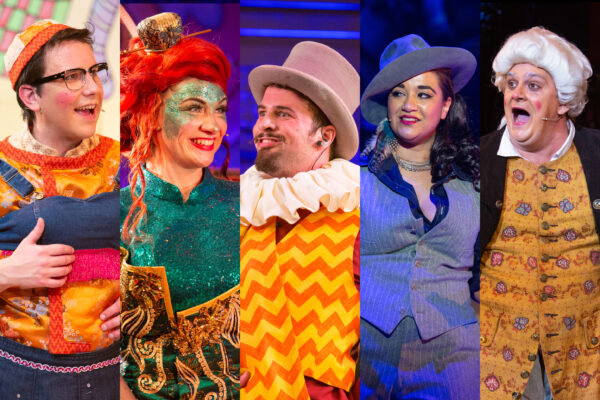 The cast of ‘The Snow Queen’ in previous New Wolsey shows.