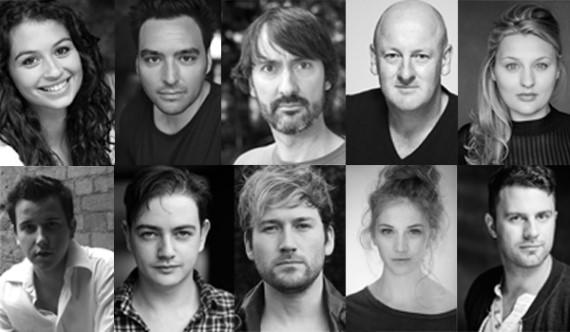 The New Wolsey Theatre are pleased as ever to announce the full cast for Sinbad – The Rock’n’Roll Panto, running from Thursday 24 November until Saturday 28 January 2017, which has been kindly sponsored by Ipswich Building Society.

This year’s cast of talented actor-musicians feature some familiar faces from previous New Wolsey Theatre shows, tours and pantomimes, including four faces that are currently starring in the smash hit co-production with Queen’s Theatre Hornchurch, Made in Dagenham!

Returning to the New Wolsey Theatre this year is:

Dan de Cruz, who currently stars in Made in Dagenham, and has been a regular face in New Wolsey pantomimes as well as their actor musician shows Sweet Charity and Mods & Rox. Dan will be playing the role of evil sorcerer Sinistro.

Graham Kent, currently starring as Harold Wilson in Made in Dagenham will return as Dame for the second year – due to popular demand!

Daniel Carter-Hope, currently performing various roles in Made in Dagenham will play Caliph of Constantinople. Whether or not he will have his much loved beard is yet to be confirmed.

Elizabeth Rowe, who is currently making her theatrical debut in Made in Dagenham, will be staying in Ipswich to play story-teller Scheherezade.

Familiar panto faces who you will know from the sell-out panto The Sword in the Stone include: Lucy Wells as feisty Jade, Adam Langstaff as the Captain (as well as drums), Rob Falconer (otherwise known as King Kay to his friends) returns to play Tinbad the Tailor, and popular panto and actor musician alumni James Haggie, who last graced the New Wolsey stage in Sweet Charity back in 2015.

New to the New Wolsey Theatre rock’n’roll pantos this year are:

Steve Rushton has most recently performed in the West End in the Green Day musical American Idiot, where he won the Broadway World Award for Best Featured Actor in a New Musical. He was a member of popular boyband Son of Dork – the spinoff band created by Busted’s James Bourne. After leaving Son of Dork, he embarked on a solo career creating music for soundtracks such as Hannah Montana, Disney Channel’s The Suite Life on Deck, and Wizards of Waverley Place. Additionally Steve has written songs for The Jonas Brothers, Aiden Grimshaw, Amelia Lily, as well as further Disney movies.

This second brand new pantomime has been written by the New Wolsey’s Artistic Director Peter Rowe who also directs, with musical direction from Ben Goddard. Returning to design this year’s set and costumes will be Barney George, with lighting and sound designed by Richard G Jones and Simon Deacon respectively, and Darragh O’Leary also returns to choreograph.

Alongside this news, Ipswich Building Society continues to sponsor the rock’n’roll pantos and is now in their second year of sponsorship. The organisation has kindly agreed to sponsor the New Wolsey’s sell-out pantomimes for the three years.

Written by Peter Rowe, and performed in the New Wolsey Theatre’s ever-popular actor-musician style, this brand new adaptation of the amazing adventures of Sinbad is bursting with music, mayhem and magic.

Sinbad, determined to win the hand of the beautiful Princess Pearl, sets sail aboard the Saucy Sausage on his most dangerous voyage yet – past the Island of the Sirens, and the Plughole of Poseidon to the paradise of Nirvana itself! But can he save the Princess from the clutches of the evil sorcerer, Sinistro? Will his mother, Dame Doner Souvlakia, find true love in this tropical Paradise? Can fair winds blow Sinbad to fame and fortune, or will the perfect storm shipwreck all his dreams?

Packed with classic tunes including THE BOYS ARE BACK IN TOWN, THE POWER OF LOVE, I WANT TO BREAK FREE, LIVING ON A PRAYER and SMOKE ON THE WATER, Sinbad is a feast of treats for all the family.

Book now for the voyage of a lifetime!

Tickets are on sale now and can be booked through the Tickets Sales Team by calling 01473 295900 or by booking online here where there is the option to live chat with the team should you have any further questions.