Announcing the cast for this year’s Rock ‘n’ Roll panto – ‘Goldilocks and the Three Bears!’ 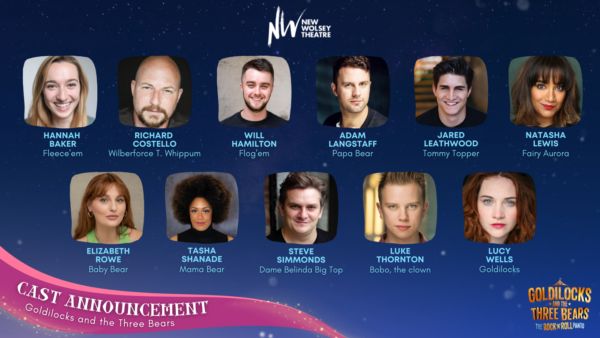 The New Wolsey Theatre has today announced the full cast and creative team for this year’s Rock ‘n’ Roll panto Goldilocks and the Three Bears, which will run from Thursday 24 November 2022 – Saturday 28 January 2023 and will be livestreamed simultaneously from Thursday 15 December 2022 – Monday 2 January 2023.

The annual Rock ‘n’ Roll panto, written and directed by Peter Rowe, will be packed with over twenty classic songs played live by a multi-talented company of actor-musicians. Peter Rowe stepped down earlier this year as Artistic Director of the New Wolsey Theatre, completing a celebrated 22-year tenure at the award-winning theatre.

The theatre, which champions making performing arts accessible and is a founding member of the theatre consortium Ramps on the Moon, will offer audio description, British Sign Language (BSL) interpretation, captioning, relaxed/dementia-friendly and livestreamed performance options and pre-show touch tours during the run. The New Wolsey Theatre’s 2021 Rock ‘n’ Roll panto, Jack and the Beanstalk, won the 2022 Pantomime Award for Best Pantomime (Digital) for their livestreamed performances.

Dame Belinda Big Top’s circus troupe has fallen on hard times. But her ringmaster, Tommy Topper, Bobo the Clown and Ali the Aerialist have stuck by her and she is determined that the show must go on. Down the road rival circus owner, Wilberforce T. Whippum, and his two sidekicks Flog’em and Fleece’em, are coining it in with their animal acts – Dexter the dancing dromedary and Goldilocks and The Three Bears. Whippum plans to buy up Belinda’s operation and pull the pegs on her beautiful travelling tent forever. But soon the girl and the bears hatch a plan to free Dexter, escape from Whippum and give Belinda’s old carnival just the boost it needs. Will Goldilocks find true love with Tommy Topper? Can Bobo the clown find a partner for his double act? Will the bears get their porridge and will Belinda get her oats?

The cast of Goldilocks and the Three Bears will be Hannah Baker (Brass) as Fleece’em, Richard Costello (Death of England) as Wilberforce T. Whippum, Will Hamilton (professional debut) as Flog’em, Adam Langstaff (The Who’s Tommy) as Papa Bear, Jared Leathwood (Billionaire Boy) as Tommy Topper, Natasha Lewis (The Boy in the Dress) as Fairy Aurora, Elizabeth Rowe (Made in Dagenham) as Baby Bear, Tasha Shanade (The Little Mix Show) as Mama Bear, Steve Simmonds (The Secret Diary of Adrian Mole Aged 13 ¾) as Dame Belinda Big Top, Luke Thornton (The Secret Diary of Adrian Mole Aged 13 ¾) as Bobo, the clown and Lucy Wells (Steel Magnolias) as Goldilocks.

Joining Peter Rowe (Once, Never Lost At Home) on the creative team for this year’s production are Debbie O’Brien (The Choir of Man, Dirty Dancing) as Casting Director, Ben Goddard (Made in Dagenham, The Hired Man) as Musical Supervisor, Cleo Pettitt (Grandma Saves the Day!) as Set & Costume Designer, Richard G. Jones (Only Fools and Hoses the Musical, Sunset Boulevard) as Lighting Designer, James Cook (Once, Burke & Hare) as Sound Designer and Sundeep Saini (Grandma Saves The Day!, The Secret Diary of Adrian Mole Aged 13 3/4) as Choreographer and the New Wolsey Theatre’s award-winning technical team will oversee both the in-person and digital panto offerings.

Tickets for Goldilocks and the Three Bears are on sale now – book them early to get the best seats at the best prices!